Garden of the Gods Park History Long before Garden of The Gods was a park, geological features began to form. It all begins in the Pleistocene Ice Age, which resulted in the erosion and glaciation of the rock, creating the present rock formations. The ancient sea remains of mountain ranges, alluvial fans, sandy beaches, and sand dune fields can all be found in the rock.

The outstanding geological features of the park are the highly visible sedimentary rock formations. These rocks were created as ancient mountains eroded and were buried in their own sediments. Massive sand dunes moved across the land, and shallow seas and deeper oceans encroached and retreated.

Each environment left behind gravel, sand, and ocean deposits that formed horizontal layers over millions of years. The multiple formations were then uplifted and slowly brought to the surface by a series of mountain-building events.

The resulting rocks are stood-up, pushed around, and slanted. “Balanced Rock”, at the south end of the Park, was formed as erosive processes removed the softer layers near its base, eventually leaving the precarious-looking outcrop seen today.

In August of 1859, two surveyors started out from Denver City to begin a townsite, soon to be called Colorado City. While exploring nearby locations, they came upon a beautiful area of sandstone formations. Surveyor M. S. Beach suggested that it would be a “capital place for a Biergarten” when the country grew up. His companion, Rufus Cable, a “young and poetic man”, exclaimed, “Biergarten! Why it is a fit place for the Gods to assemble. We will call it the Garden of the Gods.” It has been so-called ever since.

By the 1870s, the railroads had forged their way west, and in 1871, General William Jackson Palmer founded Colorado Springs. Later, in 1879, General Palmer repeatedly urged his friend, Charles Elliott Perkins, the head of “the Q” Railroad, to establish a home in the Garden of the Gods and to build his railroad out to Colorado Springs.

Although “the Q” never reached Colorado Springs, Perkins did purchase two-hundred and forty acres in the Garden of the Gods for a summer home. He later added to the property but never built on it, preferring to leave his wonderland in its natural state for the enjoyment of the public.

Perkins died in 1907, before he made arrangements for the land to become a public park. Although it had already been open to the public for years, it was his children’s decision that sealed the park’s fate. In 1909, Perkins’ children, knowing their father’s feeling for the Garden of the Gods, conveyed his four-hundred eighty acres to the City of Colorado Springs.

It would be known forever as the Garden of the Gods, “where it shall remain free to the public, where no intoxicating liquors shall be manufactured, sold, or dispensed, where no building or structure shall be erected except those necessary to properly care for, protect, and maintain the area as a public park.”

Rock Ledge Ranch Historic Site’s story begins with the Native Americans. The Ute’s oral tradition says that Colorado is their homeland and they have no migration story. After the Ute people acquired horses from the Spanish around 1630, they became skilled horsemen. Camp Creek Valley, which today includes Rock Ledge Ranch, provided the Ute a base camp where they found abundant water and diverse plant life.

The Ute Trail passes through Garden of the Gods and the Ranch site. In the mid-19th century, gold discoveries and further Westward expansion and settlement brought the U.S. government and the Ute into conflict. As a result, the Ute people were removed from this area to reservations in Southwestern Colorado and Utah in the 1870s. 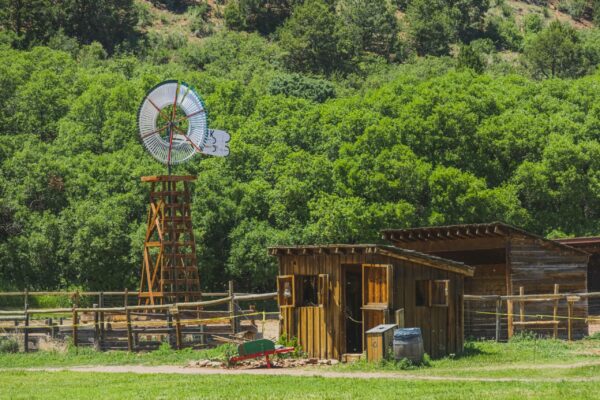